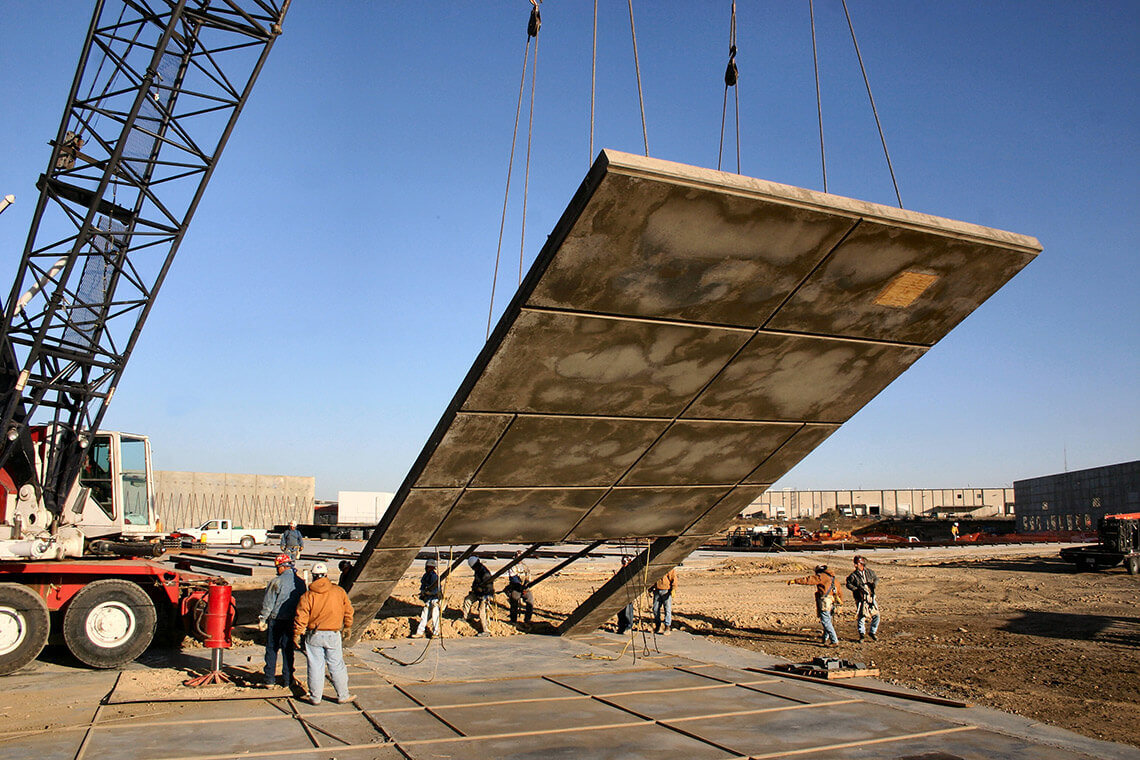 Traces the history of Tilt-up Construction from the time of the Roman empire until today.

The basic principle behind tilt-up construction – constructing walls horizontally, on the ground, and then lifting them into place – is not a new idea. Evidence exists that some buildings constructed during the Roman Empire and the Middle Ages used this approach. More recently, American settlers in the 1800s gathered for “barn raisings” where they constructed the wood walls for their buildings and tipped them up into place.

The 20th century marked the true beginnings of modern tilt-up construction. The development of concrete reinforced with rebar in the early 1900s allows builders to create tilt-up commercial structures as we think of them today: One- to two-story structures built with walls comparable in width to those created with other methods of construction.

Even with this innovation, tilt-up construction did not gain wide acceptance until after World War II, when the mobile crane was first developed. The mobile crane allowed builders far greater ability to lift the massive panels into place, regardless where the job site happened to be. At about this time, ready-mix concrete was introduced to the industry, making tilt-up an even more viable alternative.

”The basic principle behind tilt-up construction - constructing walls horizontally, on the ground, and then lifting them into place - is not a new idea. Evidence exists that some buildings constructed during the Roman Empire and the Middle Ages used this approach.

These new technologies occurred at precisely the right time. The late 1940s brought about a post-war boom in the construction of manufacturing and industrial facilities across the United States. Innovation, timing, and the need for large, warehouse-styled buildings opened the door for tilt-up construction. The three factors combined to encourage general contractors to embrace tilt-up as an economical means of delivering quality projects that meet even the most demanding specifications and schedules.

Over the years, industry experts have continued to refine and enhance the tilt-up process, allowing general contractors and design-build construction managers to drive greater capabilities and creativity in its use. In 1986 the Tilt-up Concrete Association (TCA) was created to establish processes and standards to ensure continued growth in quality and acceptance for this method of construction.

Tilt-up concrete construction has since been used in buildings as large as 1.7 million square feet, with individual panels reaching as high as 91 feet and weighing 150 tons. The TCA reports that 15% of all industrial buildings in the U.S. were created using tilt-up construction. It is growing at an annual rate of almost 20% and is used in over 650 million square feet of new building construction each year. In Texas and other sunbelt states, tilt-up accounts for as much as 75% of new one-story commercial building construction. General contractors, design build contractors and builders in Mexico, Canada and Australia are also using tilt-up concrete construction on an increasingly frequent basis.